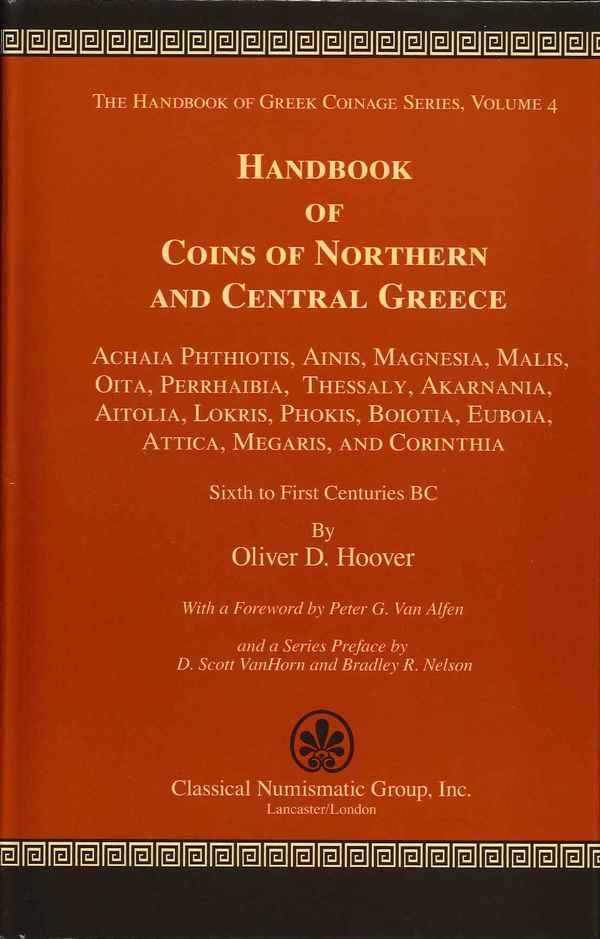 This volume in the series is Handbook of Coins of Northern and Central Greece: Achaia Phthiotis, Ainis, Magnesia, Malis, Oita, Perrhaibia, Thessaly, Akarnania, Aitolia, Lokris, Phokis, Boiotia, Euboia, Attica, Megaris, and Corinthia, Sixth to First Centuries BC (Volume 5 in the series). Beginning in central Thessaly with Achaia Phthiotis, this volume moves clockwise around that region, covering the various tribal issues, followed by the coins of the Thessalian League and the region's various cities. From Akarnania the catalog moves eastward along the Corinthian Gulf to the heart of Central Greece and the Isthmus of Corinth, ending with Tenea. The coinage within each region and city is arranged chronologically, beginning with the Archaic issues and continuing through the later civic issues in the name of Alexander. Coins are arranged in the catalog with gold first, followed by silver and bronze; each metal is arranged by denomination, largest to smallest
.

Handbook of Coins of Macedon and Its Neighbors. Part I: Macedon, Illyria, and Epeiros, Sixth to First Centuries BC HOOVER O. D.65.00 €

Handbook of Coins of Macedon and Its Neighbors. Part II: Thrace, Skythia, and Taurike, Sixth to First Centuries BC HOOVER O. D.65.00 €

The Handbook of Greek Coinage Series, Volume 1 - Handbook of Coins of Italy and Magna Graecia, Sixth to First Centuries BC HOOVER O. D.65.00 €

x
Would you like to visit our site in English? www.cgbfr.com